The Citizen and the Challenge of American Civilization 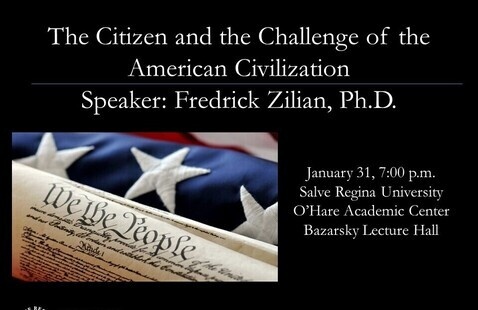 http://www.pellcenter.org #American Civilization
View map
Add to calendar
Save to Google Calendar Save to iCal Save to Outlook

Since the 1950s, the American citizen and American democracy have been under stress, challenging the United States of America, the principal guardian and vehicle of American civilization. This lecture will examine these stresses which have led to a civic character deficit, manifested in hyper-individualism and an unhealthy level of domestic discord. The lecture will then present an historical analogy: ancient Athens—the world’s first democracy—during the Peloponnesian War, a tale of warning for us. The lecture will conclude with proposals for addressing our civic character deficit and improving our civicism.

After a 21-year career as an infantry officer in the Army, Fred Zilian was an educator at Portsmouth Abbey School, 1992-2015, where he taught history, ethics, and German. He was an adjunct professor (history and politics) at Salve Regina University, 2016-2022.

Zilian holds a Ph.D. in international relations/strategic studies from the Paul H. Nitze School of Advanced International Studies, Johns Hopkins University. He is the author of numerous articles, essays, and book reviews on history, American society, Germany, religion, music, education, climate change, and globalization in a wide variety of publications from the Wall Street Journal to the Newport Daily News. He has also published a book: From Confrontation to Cooperation: The Takeover of the National People’s (East German) Army by the Bundeswehr. For 20 years he performed as Abraham Lincoln in his one-man play, “Honest Abe.” He gives historical tours of Newport, including the Battle of Rhode Island.

He is currently a writer and lecturer. He contributes to the following online sites: The Hill (www.thehill.com ), The History News Network (www.historynewsnetwork.org ), and the Online Review of Rhode Island History (www.smallstatebighistory.com ). He blogs on a wide variety of subjects at www.zilianblog.com. He is writing a book on the subject of this lecture: “The Citizen and the Challenge of American Civilization.”

If you are not a current Salve Regina student, faculty or staff member, please create an account to register for events.